You are here: Home › FAMILY › WHAT WAS ANTHONY WEINER THINKING? 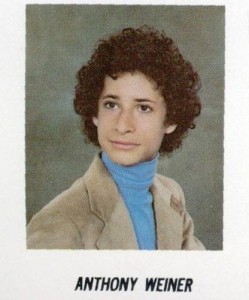 It’s hard for me to look at guys like Anthony Weiner without feeling more embarrassed for them than I ever feel for myself.

Some men are more open and keep paperbacks, like Hot Babysitter in Chains, out on their night tables.

On the continuum of sexual diversions for married men, the act of sexting lies somewhere between Hustler and Rielle Hunter. It’s up to each couple to figure out where to draw the line.

For public figures, the collateral damage of getting caught at sexting and other dalliances is augmented exponentially.

Popular wisdom suggests it’s power that leads to the arrogance that leads the Weiners, the Clintons, the Edwardses–such intelligent men–to delude themselves into believing they can get away with acts so potentially humiliating to themselves and their families.

Some men do get away with it. Remember Joey Buttafuoco? He was not a public figure until his girlfriend Amy Fisher shot his wife Mary Jo in the head. Mary Jo stood by her man for more than a decade afterwards. Joey and Mary Jo are my personal favorites of the genre.

The way pols are dropping like flies these days, it makes you wonder whether everyone is sexting, though we know only about the ones who get found out.

It’s hard to believe Clinton deluded himself into risking his country’s well-being, playing the cigar game with Monica Lewinsky. But for me, it’s almost harder to believe anyone would risk exposing his family so publicly and perhaps losing his family in the process. Yet so it goes with all these politicians.

It doesn’t excuse them, but I do think it’s delusion that allows them to take chances. Otherwise, what could someone like Weiner possibly have been thinking? It’s unimaginable he’d have sexted his crotch bulge if he’d actually gone through the scenario in his mind of getting discovered.

Or did Anthony Weiner say to himself, Hm, what’s the worst that could happen? After all I’m just tweeting a photo of my waxed chest and the swell swell in my Jockeys to at least 6 women, who are strangers and who are probably old enough to drink alcopops. I’ll be cautious. No one will ever know.

Weiner says there were at least 6 women involved. At least? Does he not know or is it that hard to keep track? Maybe he worried word would get out if he’d sexted 7. The next step, of course, is the going-into-treatment excuse.

What do you figure these guys were thinking?

2 Responses to "WHAT WAS ANTHONY WEINER THINKING?"