You are here: Home › FAMILY › A MOTHER SURVIVES “SURVIVOR” 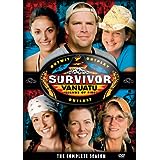 Unrelated Announcement, my new article: CAN SEPARATE BEDROOMS SAVE A MARRIAGE? Weigh In!

It wasn’t like I had a choice when, at the breakfast table, my then-21-year-old daughter Eliza presented me with documents to sign. The whole family had to swear to confidentiality or the plan was off for her to be a contestant on “Survivor.”

If I refused to sign, the plan  was off for her to continue being my daughter.  So I signed.

Her father, my ex-husband, reassured me “CBS makes too much money from the show to let anything happen to her.”

But I had seen the episode where a contestant fainted and fell forward while huffing to augment a campfire.  Cameras rolled as he lifted his face from burning logs with the skin hanging off his hands.

I tried to be excited for her.  After all, I would have applied for the likes of “Survivor” when I was her age.  But I kept thinking up things like What will happen to Eliza’s teeth if she goes six weeks without flossing?

The closest I ever got to TV fame occurred when I was 22, during a micro affair with Chuck Barris, creator of “The Dating Game.” He offered me a gig to go to Colorado Springs as a “Dating Game” chaperone. My training consisted of one instruction:  Make sure the girl doesn’t get pregnant.

Worry is relative.  My daughter’s 26-hour trip on three flights to get to her “Survivor” destination, including one on Air Vanuatu, would have been enough to make me go on a hunger strike.  But the idea of her starving on an island, one I’d never heard of, trumped the aviation rumination.

Thankfully it was pre-tsunami.

I got through it, perhaps calling on the same resources that help me worry less now that my daughters no longer live at home. Although they go out in cars and subways till all hours among drunks (themselves at times driving sleepy, which is the same as driving drunk), I can at least pretend they are snug in their beds when I turn off my bedside lamp at night.

How do you cope with worrying about your loved ones?

LOTS ABOUT MARRIAGE AND RELATIONSHIPS AND MY DAUGHTERS IN MY NEW MEMOIR . . .

*Family Vacation With My Ex

*Survivor Series 2012: The Importance of Personality

* Survivor Series 2012: Q&A with a Favorite Contestant for Winning Strategies

*How To Make A Sweet, Decorative Chocolate Candy House

*Home For The Holidays: Family Activities And Holiday Traditions With My Grown Children

*Top 7 Books To Give As Gifts And To Read

6 Responses to "A MOTHER SURVIVES “SURVIVOR”"